This post is a part of #IntPiPoMo! You can find out more, and sign up at this link.

For those of you who haven't heard about this "Steam Challenge" thing, here's the TL;DR. 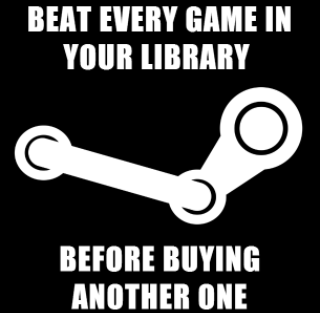 Yup. That pretty much sums it up. Now, I definitely don't have as many games as some other folks do hiding away in Steam, but I do have a lot that are downloaded and half-played. But I have the tendency to download new ones without ever getting rid of the old ones.


So I'm changing the Steam Challenge for my own personal use: Beat a downloaded game before downloading another. And "beat" could be a plethora of things: finish the main story, gain all the achievements, play until it's unsatisfactory... you get the idea.

The first one on my list was Hatoful Boyfriend. I had purchased and downloaded the game back in August. One of the podcasts I listen to does a "Monthly Game Club" pick and at the end of the month does a summation of the game--their thoughts, the story, etc. One of my favorite bloggers, Grace, ended up picking Hatoful for the month, and I had to give it a try. Unfortunately, life picked up so I never finished the final ending of it. Having finally finished it, I finally listened to their summation podcast, and it felt great to know I wasn't the only one who felt the way I did about the game!

I'm going to try to stay away from spoilers, but I cannot guarantee, so just be warned. First of all, I didn't expect a bird dating sim (yes, you read that right) to make me have feelings in just the normal play throughs. As with other dating sims, you pick a character to pursue and have at the story with them. Each story had an ending (and some had a second, "extended" ending) and some were sweet, whereas others were... creepy. But all of them had some story that seemed to weave and connect together.

Good storytelling, right? So much better than that. Once you play through specific endings (though I'm not sure which ones they are, as I completed all the normal endings first), you can start a new game which will lead you to an alternate ending. And man! The ramifications of that story! It takes a dark twist really fast, and just keeps leading you down the rabbit hole. But the amazing thing? All of the little story bits you've picked up throughout all the dating endings come to a close in the final story.

It is quite amazing. I cried a bunch. I laughed a bunch. I said "NO WAY!" a. bunch. The way it all ties together was mind blowing. That so much forethought had gone into this silly bird dating sim to create something much more than that. There is also an Epilogue ending you can get if you have completed all of the prior endings, and it ties everything else up in a nice little bow, and makes you feel better about the outcome of things.

All in all, the game is definitely worth it if you like stories, and can get past the initial silliness of it masquerading as a bird dating sim.

So, here's a bunch of screenshots to show how fun(ny) the game is. I avoided spoilers as much as possible (there might be a few but they leave the context out), but if you don't care about spoilers, you can view my album over on Anook! (#IntPiPoMo 9-21/50)