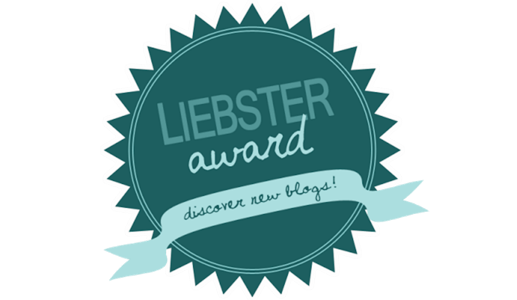 Towards the end of last week, I was nominated by both Aywren and Iron Weakness to participate in the Liebster Award. A nasty cold/fever knocked me out this weekend, so I am just getting to it now.

As with Aywren, this is the first time I've heard of this, and I am honored to be able to participate in the large chain of bloggers participating in this.

So there's a few different ways to go about this award, as I have researched, but I am going to go the same route as Aywren--state 11 random facts about myself, then answer the questions posed to me by my nominators, create my own list of eleven questions, then try to nominate five other bloggers to participate. The only issue with this last bit, is that most of the blogs I follow have been nominated--so I'm going to try very hard to include folks that haven't been nominated, which means I might end up picking a podcast folk or two.

So, without further ado, let's begin!

1. If money and time was no object, what would you be doing right now?

I would be home, gaming, creating to-do lists, updating my blog, writing, RPing, crafting (in real life and in-game), watching TV, cooking, and reading...
2. What was the name of your first blog?
This is my first blog, and it has retained its name since its creation. Yep, stuck with this thing for about four and a half years. On and off, of course, until recently when I got back into it full force and for me instead of an audience.
3. Are you a morning or night person?
I'm actually not quite sure anymore, based on when I get up for work in the morning. I always used to consider myself a night person, but I'm up so early, I might consider myself a morning person. Honestly, though, it doesn't really matter, because I'm the type of person that'll sleep whenever.
4. If you could live in any period of history, when would it be?
This is a tough one. I might have to say the future. I have hope that one day people won't see such things as age, gender, race, religion, weight, social class, etc. and that we'll all treat each other decently like human beings.
5. When did you first play video games, and what was the first game you remember playing?
I would play games on the computer when I was young. Some of my earliest memories are watching my dad play Myst. I was so into it, but he never let me play it. The first game I started playing was Lego Island after it was released, because my parents purchased it for my younger brother. I played it way more than he ever did, though.
6. Name a gift you will never forget.
My favorite cat Oberon was a gift from a friend for our wedding. He was given to us because our first cat walked out on us and never returned, and we were heartbroken. Oberon is my baby. He'll sleep on me in the middle of the night, and come over and headbutt me and put his paws on my leg when he wants attention.
7. If you had to describe yourself in three words, what would they be?
Pretty. Freaking. Awesome.
8. Tank, heals, DPS, support, or crowd control?
This is a tough one, because I love to excel at everything in a game. Call it a completionist or achievement-oriented personality, but I don't see myself as playing my best if I can't do any and all of it (eventually).
9. If you could meet any historical figure, who would you choose and why?
Any historical figure? I'm honestly not sure. While I enjoy history (and, admittedly, historical fiction), I feel that meeting someone from history I admire would ruin my view on who they are.
10. What is one item in a MMO inventory that you should probably throw away, but never will?
I clean out my bags pretty frequently, but, pretty clothes. I like the idea of pretty outfits in games, even if I'm not the best at "costuming" or "cosplaying" or "transmogriphying" other genres/characters.
11. Do you have a “main” character that you roll consistently in MMOs?
Chestnut the Tank. In every single game since I met my (now) husband, we've always rolled up mains named Chestnut and Chaide. I'm always a tank class, and he's always a healer class. It's what we enjoy doing the most.

1. How did you get started blogging?

I'm going to be shameless, and rip a bit from my about page. This blog started as a way to become more social and overcome my social anxieties by joining the WoW blogging community. Since its conception, it has become more of a general area for me to discuss what I've been playing, and my thoughts on various geeky things.
2. What ability or skillset do you most admire in others but personally lack?
The ability to forgive and forget. I try my hardest daily to forgive folks for the wrongs they do to myself and to others--whether it be general rudeness, or full on drama-llama shit-storm. And some folks have the gift to shrug it off and move along and forgive. I'm one to take it personally, hold onto it, and mull for a very long time. I feel like I'm getting better at forgiving others and moving on with my life, but it has take a lot of time and practice. And it's never easy.
3. You’re a long forgotten celebrity from the 80s looking to make a comeback. Which reality show do you make an appearance on and why?
Quite possibly The Tester, because it's about video gaming, and I would hope folks would understand that anyone and everyone can enjoy (and work in) gaming by my participation.
4. What’s the origin of your blogging name?
My blogging name first started out as Essence (even though I'd rolled up my first Chestnut toon at that point), because that's what my gamertag on XB was (or it's similar, at least). It has since migrated to Chestnut, because that's how I've been known online while gaming for over five years, now.
5. Which blogger would you like to meet in real life and why?
There's a lot of bloggers I'd love to meet in real life, and I hope to do so one day, but at this moment in time, I'd very much like to meet Belghast, as he's been a pretty awesome person that's made me feel more confident in being myself and blogging the way I want to. So, thanks, Bel, for being awesomesauce-tacular.
6. What is the most important thing you’ve learned from blogging?
Fab question! The most important thing I've learned is that I need to write for myself. Yeah, it's nice to have hits, and have folks read what I write and comment on it, but most of all, I need to write for myself, and be social as a part of the community for myself. Doing it for myself makes it something enjoyable, and not a chore, nor something where I feel like I'm being social as an ends-to-a-means.
7. What work of fiction would you like to see made into an MMO virtual world that hasn’t been done already?
Oh, this is a tough one. My favorite author, Jennifer Fallon, has some fabulous works and series that link together in the same universe (Hythrun Chronicles) that would be absolutely interesting to explore. However, it would need to contain all of the political drama the novels do to feel real to the environment. There's magic users and normal humans, and it'd be a very neat dichotomy to try to make everyone on equal footing.
8. What role of the holy trinity of tank/dps/healer fits your personality most?
Along the lines of Aywren's question, I would have to say I'm a fluid mix of all three. I like to be a leader and tank/heal folks. But I'm also one willing to step back and let other people take the spotlight. Some days it's nice to be a faceless DPS, and other days I like holding people's lives in my hands.
9. If you could have one superpower, what would it be and why?
I've never been good at these questions, because there's so many super powers that're epic. I think I might like to control fire or water, though. Something elemental-based. Though telekinesis would be cool, too. Maybe pyrokinesis?
10. If you could cut and paste your favorite games into one mega-ultra-super MMO, what would it look like?
I haven't really played enough games to feel like I could cut and paste certain aspects into a super-ulta-epic MMO. I can tell you, that my favorite MMOs have included things such as: a challenging crafting system, a player-driven market where things actually sell, mini-pets, mounts to collect, achievements, housing (though I'm not the best at house design), and great social tools within the game.
11. If you were to start up a video game company, what would you name it?
Man, the tough questions! This is something I'd have to take the time to think about. Coming up with a blog title took me weeks when I first created this, so I can't imagine how long it'd take me to try to come up with a name for a company of any sort.

I will be nominating the following folks:

Posted by Chestnut at 6:56 PM
Email ThisBlogThis!Share to TwitterShare to FacebookShare to Pinterest
Labels: Awards, Life, Other